Gray
He Tian (贺天; Chinese: Hè Tiān ) is a character in the 19 Days manhua, and the most popular boy in the school. He is a top student and good at basketball. He loves to flirt and play around with Mo Guan Shan

He Tian is a very tall, lean but muscular boy. He has straight dark short hair, dark gray eyes and a very pale complexion. When not wearing his school uniform, he is often seen wearing a black track suit or dark blue clothes. He has handsome features, and is very popular with the girls at his school. He has an older brother who works under Jian Yi's father. They used to be close, but after He Cheng claimed to have buried the puppy he rescued, because their father wouldn’t let them keep it, He Tian hated him and thought of him as a heartless robot that always listens to their unknown father. He has feelings for Mo Guan Shan.

He Tian was initially seen hanging with Jian Yi and some other classmates, but quickly takes an interest in Mo Guan Shan, who he begins to spend most of his time trying to chase despite Guan Shan's reluctance. They start off with a kind of love and hate relationship, mostly from Guan Shan's side though seeing that He Tian was never subtle about his physical attraction towards Mo Guan Shan and obvious flirting. At some point He Tian goes far as kissing him at school leaving.

Mo Guan Shan very upset thinking he was only making fun of him. He Tian wasn't expecting such a reaction and after this episode between the two of them he begins to restrain himself a little more around Guan Shan.

When He Tian discovers that She Li is trying to frame Guan Shan for assaulting a girl, He Tian becomes furious and fights him in front of everyone at school for Guan Shan's sake. He wins the fight, thus making She Li to back off and leave Mo Guan Shan alone, but not without getting himself injured. After this event, Mo Guan Shan and his relationship develop further into something friendlier, or even more intimate.

Later he appears at Mo Guan Shan's house uninvited gifting him a earring and telling to use it in the next Saturday much to Guan Shan's dismay. They end up the night playing basketball in near court where both Jian Yi and Zhan Zheng Xi soon joins them. When Saturday arrives He Tian has to go and get Mo Guan out of his bed himself. It turns out the place he wanted to bring Mo Guan Shan was to some friends studio to do some work. Mo Guan Shan doesn't understand why He Tian is doing this for him but accepts the offer.

Later in the day after seeing Mo Guan Shan working very hard, He Tian decides to treat him for a dinner, but the restaurant they go happens to be the trigger of certain traumatizing memories for Guan Shan. He runs away and panics; He Tian without knowing what's going on still tries his best to comfort him. Next they are seen riding a cab and while Mo Guan Shan falls asleep He Tian takes care of him.

A few days later, He Tian is show waking up to a nightmare of his own childhood where is his older brother tells him his puppy is dead and instantly he hurries to call Mo Guan Shan to make sure he is safe. For the next couple of days he gets sick and misses class. The school ends up calling his older brother who gets him to the hospital. He talks with his brother and questions him what he wants from Jian Yi and pleads him to leave his friends alone. After this, they make a stop at a sandwich bar and He Tian catches Mo Guan Shan sneaking around. On the same day, He Tian tricks Mo Guan Shan into thinking he was in danger by sending a pic of him covered in tomato sauce and to his surprise Mo Guan Shan actually freaks out and comes to his aid, even going as far as admitting via text message that he doesn't actually hates He Tian that much. He Tian seems to take this as a love confession.

When Mo Guan Shan gets in trouble and is beaten up by a group of men, that apparently his family owns money to, He Tian comes to save him and fight those men instead. They make a run for it when the situation gets more dangerous and Mo Guan Shan ends up losing consciousness due to being injured, He Tian panics for a bit but with all the determination he has to save him at all costs he calls his older brother, He Cheng, and takes Mo Guan Shan to a hospital. He stays all night with Mo Guan Shan until he regains conscious and pays for his hospital fees. The next morning he leaves being revealed that he made a deal with his older brother of going to see their father in exchange for saving Mo Guan Shan's life and make sure nothing happens to Mo Guan Shan's family as well. The next day he texts Mo Guan Shan messing with him in a playful manner. Three days later he is shown to be in his father's place but has yet to see his father. He tries to escape but gets stopped by his father underlings. He still decides to leave after a not so friendly conversation with his father over the phone. When he is finally able to come back home the first thing he does is going over Mo Guan Shan's house. He meets him right outside Mo's apartment and when the latter is about to get up from tying his shoes He Tian simply leans over him and put his head in the crook of Mo's neck. There he tells Mo Guan Shan he's exhausted and needs to sleep.

Later, when He Tian asks Mo Guan Shan about his piercings, Mo tells him She Li pierced them. After hearing this, He Tian looked at She Li with deadly piercing eyes. He Tian then tells Mo Guan Shan to always wear the black and silver studs that he gave him, but Mo Guan Shan tells him that he can't wear them because it would be too obvious to the teachers, so he tells He Tian to get him a pair of pure black studs instead. At this request, He Tian gets up and embraces Mo Guan Shan in a tight hug and then licks his neck. 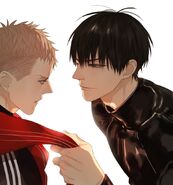 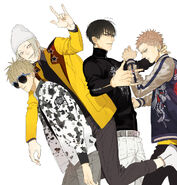 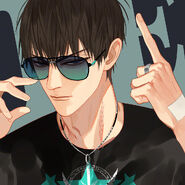 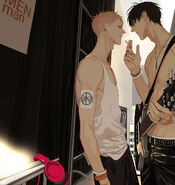 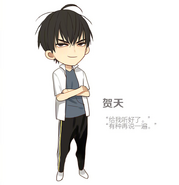 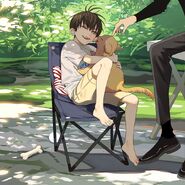 He Tian as a child
Community content is available under CC-BY-SA unless otherwise noted.
Advertisement