Brother (by He Tian)

Gray
He Cheng (贺呈) is a character in the 19 Days manhua. He is Tian's older brother and works under Jian Yi's father. Not much is known about him other that he cares about his little brother.

He Cheng is a very tall and muscular man. He looks very much like his younger brother, He Tian, as noted by Mo Guan Shan to have "familiar features" when the latter saw him for the first time. It is assumed by that he might be around 29 or 34 years old.

His aura is also described by Guan Shan to be "familiar" at their first interaction, described to be exactly like He Tian's, akin to "danger, even with the slightest provocation". He is also further described as someone who gives off "bad vibes".

Most of He Cheng's adolescence and/or early 20s is shown through the memories of either himself or He Tian.

One day while out camping, a young He Tian tries to save a stray puppy from being drowned in a river and He Cheng yells for him to hurry out because a strong torrent is coming; however, when he realizes there is no time, he rushes to protect He Tian - a sharp rock injuring him in doing so. He Tian, feeling guilty, tries to patch up his older brother and tend to his injuries. He Cheng tells his younger brother that had he gotten washed away into the river, their father would’ve killed him; as He Tian cries, He Cheng sternly tells him to “listen well”. He lets him know that he hates weaklings and advises him that if he ever wants to rescue others then he must become strong.

Soon after, He Tian asks him what happened to the puppy he saved and He Cheng tells him their father said they couldn’t keep it and so he buried it. He Tian visibly upset, feels betrayed and cries. He Tian reminds He Cheng about how he originally agreed to hide it for him and calls him a liar for not following through. He Tian calls him a demon and runs away into the forest. After a search party is sent for He Tian, He Cheng eventually finds him and apologizes. He Tian then asks him if he will be buried as well if he doesn’t listen to their father’s orders to which He Cheng quickly chides him for saying. He Cheng lets his little brother know that he and He Tian are the only people their father has left and that both He Cheng and their father care about He Tian the most. He Tian only replies that he doesn’t believe him anymore, showing that it is here where the beginning of the rift in their relationship starts and He Tian begins to view his family negatively.

Later on in the story, it is revealed that He Cheng actually never killed the puppy He Tian rescued, and instead kept it hidden as he raised it himself; however, he still hasn’t let He Tian know this information.

He Cheng was sent by Jian Yi’s father to kidnap Jian Yi but was thwarted by Jian Yi's mother. Later He Cheng's coworker "Qiu" was send to rescue Jian Yi from a man who kidnapped him. The kidnapper tried to get in contact with Mr. Jian through his actions.

He Tian's homeroom teacher contacted him to inquire about what happened on a day that He Tian was absent in school and also did not answer his phone. He Cheng then visited He Tian and started knocking loudly on the door, the latter mistaking him for a housekeeper and chasing him off, but eventually let him in. He Cheng found that that He Tian had a fever and wanted to take him to the hospital. He Tian protested at first but he was dragged by He Cheng into the latter's car. He Cheng stopped He Tian when he was trying to force his way out of the car.

He Cheng asked He Tian about Jian Yi, whom He Tian quoted is his "friend" and to "not get any ideas". He Tian then stated that He Cheng had become the type of person he hates the most. He Cheng caught He Tian by the arm when the latter almost fell to the ground due to his fever. He Cheng then told He Tian to head back to the car as the wind was too strong.

He Cheng passes by Guan Shan when he was buying sandwiches at the same store for He Tian. Mo Guan Shan ran away after seeing He Tian in the car and pondered about He Cheng when he reached a safe place. Due to He Cheng resembling He Tian, from appearance to even the aura, and also his young age, Mo Guan Shan thought that He Cheng was the "teenage dad" of He Tian.

It was revealed that He Cheng kept the puppy He Tian rescued when he was a child; however, He Tian still believes the lie his brother told him: that he killed and buried it. 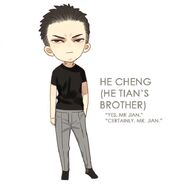