Zi Qian has long brown hair tied into two pigtails and bangs across her forehead. She has large grey-blue eyes

Zi Qian is very attached to her brother and is greatly suspicious of Jian Yi due to his action towards Zheng Xi. She is easily appeased and acts in a teasing sisterly way towards Zheng Xi so that he’d pay attention to her.

Zheng Xi forgets her birthday and Jian Yi attempts to give her a less than satisfactory present in its place.

She is the indirect reason Jian Yi kisses Zheng Xi due to her untimely arrival and attack with a door.

Zi Qian often shows up unannounced to see her brother such as in his room and when he’s with Jian Yi causing awkward misunderstanding. 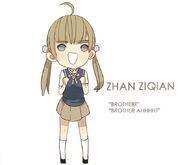 From Old Xian’s chibis, she is officially named.